Going through more of Bob’s dad’s photos, I found another one of Bob and his father. Like the photos I posted last week, this one looks like it must be from a trip. If so, it got away from its album. 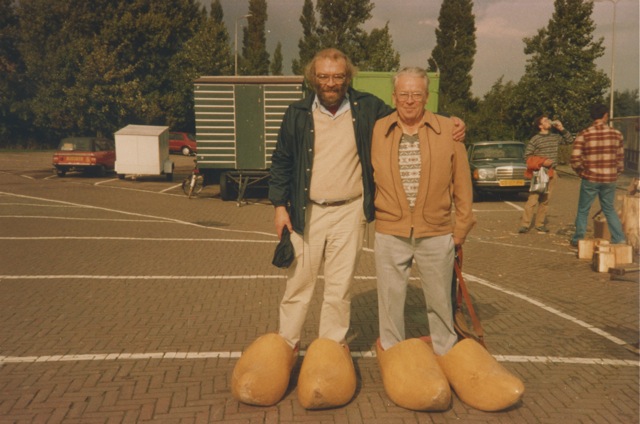 Perhaps the lesson here is that when these guys left the planet, they left some big shoes to fill.

I’m going through old photos from my family, too. There’s synchronicity in this: I’m snowed in today, and about this time 12 or so years ago I got snowed in while visiting my mother. We decided to spend our extra day together going through old photos. I’m glad we did that. We wrote names on many that I wouldn’t know how to identify now, without her. Not all the photos are marked, though.

Juxtaposition #2, here’s a selection of photos from one box I unpacked … see anyone you recognize? 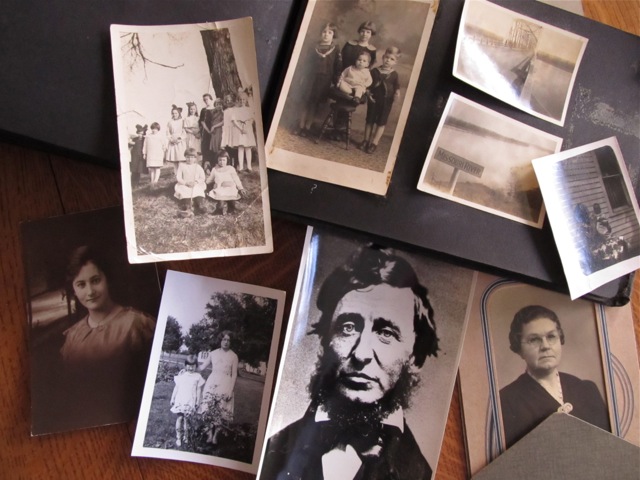 The large one in bottom row center didn’t have a name on it but seemed familiar. His style of beard and hair, his light-colored eyes with a dark rim around the irises, all were consistent with some photos I’d seen of my paternal great grandfather. When I showed the photos to Sam, I told him who I thought it might be.  “Dear,” he said, “That’s Henry

Well, no… *blush* so what’s that picture doing with my family photos? Two possibilities occur to me:

As for Henry David Thoreau: he’s a great role model for downsizers. And, transendentally speaking, I guess we could justify his inclusion in my box of family photographs by saying we’re all from the family of man. Even feminists like me can accept that. We know that half of mankind may be women, but we’re all “men” — it’s just that the wo(e) is silent.

Check out the other Weekly Photo Challenge posts here.

Adventuring Into Life With Jesus