It’s a long train ride up to the ‘top’ of Manhattan but we finally made it to the Cloisters last November. Here’s a subject dear to my heart. No — not burning books, my subject is saving them!

I prefer to think this character is lifting that book away from the fire. Saving books is what I like to think I’m doing when I list our used books for sale online, or take time to find the right homes to donate them to. I can’t stand to think of books getting thrown away or recycled.  Letting them go to the landfill would be a modern version of book-burning. (and btw, can anyone figure out the words in the banderole above the fire? I should have done that when I was there in person)

Here are a few recent triumphs from book-selling:

There was a magician named Pratt,

Who hid ninety birds in his hat.

Of a third of those birds

Were robins –  how many was that?

But back to the rule of thirds: in composition, it calls for placing the subject off-center, aligned, ideally, along vertical or horizontal lines of a grid that divides the image into nine equal parts.  “Power points” are at the intersections of these lines. If I’d paid better attention to the rule of thirds, the faces in my photos would be at power points.  As it was, I just wanted to frame the glass image with a view of the cloistered garden outside.

Here’s one more image… a medieval Wild Man, covered in hair (first cousin to the Green Man?). The Wild Man is such a favorite subject of mine that I won’t say any more about him here; I’ll save him for another post.

How about it – are you a fan of the Wild Man yet?

More about the Cloisters of the Metropolitan Museum

More about the Weekly Photo Challenge: Rule of Thirds

“Either this ceiling fan goes or I do.” That’s what I said when I fixed up my spare bedroom. Somehow the fan looked a lot worse as soon as everything else looked better.

Thanks to comments from JanL and Mickey Goodman, I went to work. Here’s a symmetrical photo of my “new” fan.

For context, here’s a link to the previous post.  And here’s the ceiling fan “before” —

With the blades flipped over, plus a new globe and pulls, it isn’t perfect but it’s certainly less obtrusive. A do-over saved the price of a new fan and kept this one out of the landfill.

“New” ceiling fan – it’s pale gray, not white, but there’s gray elsewhere in the room so it’ll do.

The flip sides of the fan blades had small rectangular stickers on them. They came off when I washed the blades, exposing a little spot of white priming on each one. They’re visible through the fretwork of the supports if you happen to really look. The finicky part of me will probably get some touch-up paint one of these days, but for now, enough is enough, and I’m moving on.

One fan down and two to go…

Yes, the quilt you can see in the background is old too, but that really is an antique… which brings us to the mysterious line between “dated” and “antique” and makes me wonder if all ceiling fans will be charming if I just wait long enough.

I’ve already replaced this fan’s old wheat-patterned globe with a plain white one, but the shiny brass may be too much for new blades and pulls to counteract. Still, it seems wasteful to replace it when it works well, so I want to come up with something. Too bad these blades are the same on the reverse, so flipping them isn’t an option.

This strategy worked well for me last time, so I’ll use it again  —

“Do you have any suggestions?”

Mining the basement: in the depths of a box full of miscellaneous stuff, I found a cigar box labeled “Junk”. It was nestled under a leg from a long-ago chair, a bunsen burner, and a selection of yo-yos.

Out of the depths of the basement… I recognize Bob’s printing.

This Red Dot woman is even more arresting on the inside cover:

What big eyes she has… and yes, it’s clear that I’m overly fascinated with vintage illustration. I didn’t find an attribution for this artist.

I’d say it’s not fair to publicize what someone kept in a junk box or drawer, but in this case it’s so much more interesting than anything to be found in a box of mine that I don’t think Bob would have minded. Maybe one man’s junk can be someone else’s treasure.

Here’s a selection. It’s heavy on ways to look at things. Other than the burnt out tube, it looks pretty useful. (I left the tube in the picture for Steampunk fans…) 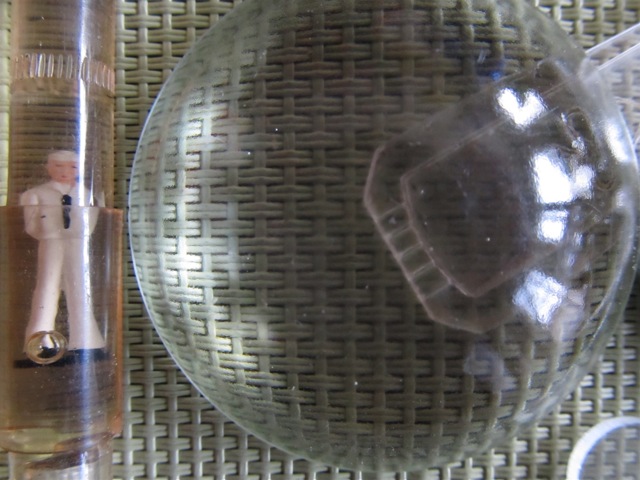 I’m not sure about this little sailor, but I think maybe he’s a level.

A little research told me it would have come in a Ralston cereal box, a toy associated with a Tom Mix radio program that Ralston sponsored in the 1940s. The original Tom (1880-1940) wasn’t part of the radio program; he was a silent and sound cinema star in early 20th century westerns who made over 100 films. This “signal arrowhead” is complete with a magnifying lens, a reducing lens, and (purportedly) a whistle and pipes, all of which a young boy scout would need to be prepared. It was tucked into the box along with several Scout badges, a touching testimonial to a happy and adventurous childhood.

Over to you now — what’s in the depths of your “junk” box? And what can I do with these things?