It’s hard to get more colorful than the Atlanta (LGBTQ) Pride parade, with its giant rainbow flag. In 2015 we watched the parade coming up Peachtree Street from an upstairs window on the front of the building. Here’s the flag approaching —

We missed the next 2 years’ parades while traveling, but were in town for the last fall’s parade. This time I went down to street level — here comes the October 2018 parade. 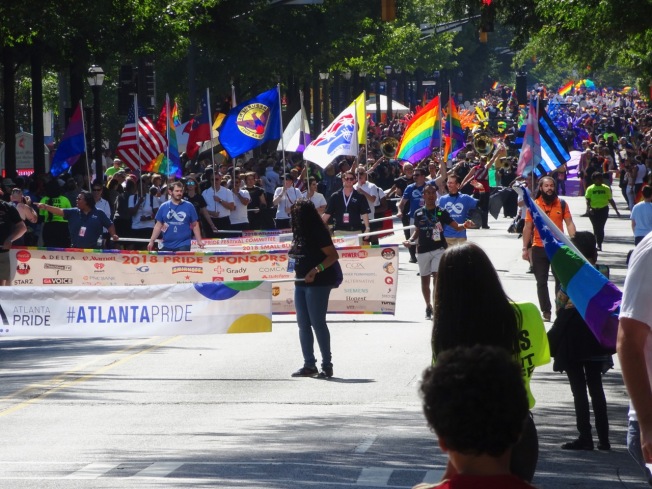 A little recent history (thanks to Wikipedia) In June 2015, The MoMA – the Museum of Modern Art in New York – acquired the rainbow flag symbol as part of its design collection. Later that month, the White House used rainbow flag colors for illumination to commemorate same-sex marriage legalization in all 50 U.S. states. 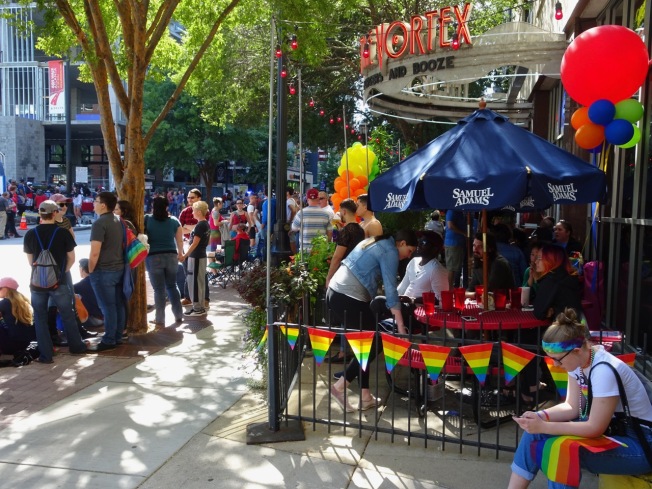 I’m not usually a fan of crowds and noise, but energy and solidarity and goodwill were running high, and it was a joy to be there. Of course it didn’t hurt that they were serving rainbow-iced cupcakes downstairs in the lobby.

… even pets came to show their support.

I have to admit that after years of seeing rainbow flags, it was just a few months ago — at the Rainbow Crosswalk at 10th and Piedmont no less — that I stared at the pavement and suddenly realized, “There are 7 colors in a rainbow but only 6 colors here! Why?” (if you’re curious, Wikipedia can help with that too)

When I was a child there was a song called “I Love a Parade” my grandmother and her friends used to refer to. Now that I live on a parade-street, I’m beginning to see what they were talking about.

Do you love a parade?